Get Started Now. View Upcoming Classes
This four string chord goes great with last weeks chord (10th fret A7) because they share the some of the same open strings. You can also add your pinky to the twelfth fret for a higher E. Have fun! 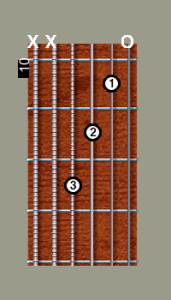