Get Started Now. View Upcoming Classes
I’m just arguing with the bookkeeper about whether or not to call this chord a Cadd9. As you may know, the 9th scale degree is the same note as the 2nd scale degree. Usually, when someone says add2 they really mean add9 but in this case the note we’re adding is actually an octave lower which makes it a real add2. Does that sound like nonsense? That’s ok. All you really need to know is that you can actually move your open G chord around for some cool effects! I’m calling this the 8th fret Cadd2 because the root of the chord (your second finger) is in the 8th fret. You can also mess around with your G chord in the 5th fret and the 7th fret. If you play this a regular G then a 5th fret G and then this 8th fret G, you’ve got the chords from the chorus of Big Empty by Stone Temple Pilots. You can also find these chord in the song Strawberry by Everclear. Remember Everclear? 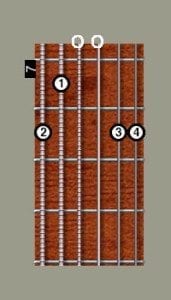