Chord of the Week: C/G

Get Started Now. View Upcoming Classes
C/G is really just another way to play C. The G, which is added to the bass, is already in a C chord (the open 3rd string). We’re just putting it in a different place. However, a small change can make a big difference! The C/G has a great depth and when it comes to guitar, it’s one of the most powerful inversions! I play a C/G probably two out of three times instead of C. It’s almost always a good idea. Try it! 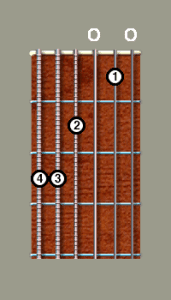