Chord of the Week: Dadd4add9

Get Started Now. View Upcoming Classes
Boring old D chord got you down? Try the Dadd9add4! This chord can be found in REM’s “Man on the Moon”, “The Engine Driver” by The Decemberists and Third Eye Blind’s “Jumper”. All you have to do is play a C chord and then move it up two frets. 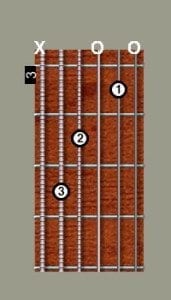