Chord of the Week: E Diminished

Get Started Now. View Upcoming Classes
Happy Halloween! Here is one the spookiest chords around (the E diminished). This diminished chord is normally played just before an F chord. To maximize spookiness follow these steps.

2. Move the chord up so that your first finger is on the 5th fret

3. Move again so your first finger is on the 8th fret

4. And one more time so your fist finger is on the 11th fret

It should sound like a damsel has been tied to the train tracks while a villain strokes his handlebar mustache. Try that any time someone says something ominous, e.g. “Who left the cheese on the heater?” and go… 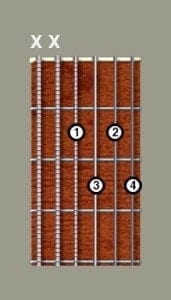