Chord of the Week: Asus2

Get Started Now. View Upcoming Classes
Here is a nice simple, easy to play chord. The “sus” in Asus2 is short for suspended meaning it creates suspense. Sus chords are great to use if you’re scoring a film or a play. If you’ve every watched HBO’s “Flight of the Conchords”, you’ll notice that many of the scene changes are littered with these chords which gives you the feeling that something is unfinished. Try subbing it out for a regular A major. 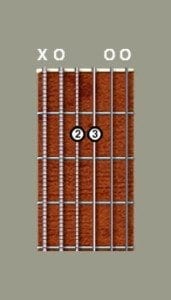