Chord of the Week: The Hendrix Chord

Get Started Now. View Upcoming Classes
Here it is! This chord is prominently featured in both Foxy Lady and Purple Haze and can also be referred to as an E7#9 though guitarists all over the world know it as the Hendrix Chord (just in time for his birthday). 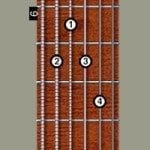