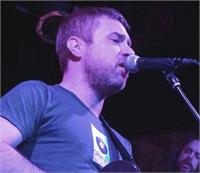 Shane Chapman is the lead singer and guitarist for Brooklyn Americana band anacortes who has just released their second album. When he's not doing that, he is the guitarist and arranger for NYC's premiere Dolly Parton cover band Doll Parts. Also as a performer, he was featured on the steam punk album Tempus Fugitive by The Peter Ulrich (of Dead Can Dance) Collaboration.

As a composer, Chapman has a foot in the rock world as well as the theater and film worlds (yes that's three feet). He has written music for Comfort Dogs and The Iceman Cometh, both reviewed by the New York Times which called the music "groovy" and "soncially gorgeous". More recently (as one half of the composition team - Chapman/Sirna-Frest) he wrote music for Welcome to the Gunshow: A Chekhovian Song Cycle directed by Patrick Vassel (Associate Director of Hamilton).

His most recent production credit was a single for the Songs of Love Foundation which enlists volunteer composers to write songs for children facing life threatening illness. He also performs regularly for Sing for Hope which organizes musical performances at hospitals, clinics and shelters in NYC.

His teaching credits include The Seattle Center Academy and Groundwork (an after-school program for at risk youths in NYC) and, of course, NYC Guitar School.

Chapman has taught at NYCGS since 2008 and is the author of multiple curriculum teaching students to rock for over ten years. He is currently scoring "Silent Forests", a full length documentary about the ivory trade and the eco-guards in Cameroon who fight poaching.

Chapman lives in Brooklyn with his wife Amy.