Get Started Now. View Upcoming Classes
With two open string juxtaposing the high notes, this is a beautiful sounding chord. Now you can’t just go subbing it out for an A7 just willy nilly. It doesn’t always work. You’ll know when it’s time.

P.S. The 4th finger is optional. It’s lovely with an open E as well. 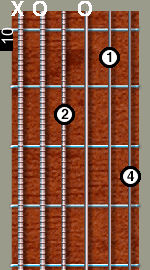